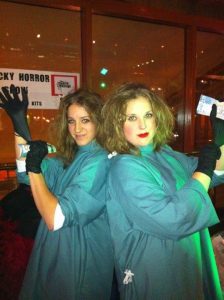 Theatre Garage was founded by Christy Greenwood and Tessa Stamp in 2009.  Christy and Tessa met while working as technicians at The Citadel Theatre. Christy, a dresser and Tessa, a lighting tech, got to talking about forming a company to sell their costumes and puppets respectively; something small, primarily to remove their crafting enterprises out of their living spaces. The venture quickly turned into something far greater then either would have predicted. Tessa heard that a local costume and dancewear shop, Shirley Potter’s was closing and that all the merchandise and costume collection was for sale. Christy, a former seamstress for the store knew of the value and the importance Shirley Potter’s had had in Edmonton since the 1960’s and could not bear to see this collection sold for parts or worse, thrown out. Tessa and Christy purchased the store’s collection and began reading up on ‘how to start a business’ with the local Business Link. The summer of 2009 was a whirlwind with both continuing to work full time and planning for this new venture every spare minute they had. They held the keys to this new adventure but the store was still without a name. Tessa came up with ‘Theatre Garage’; a working title until they thought of something different, but it stuck. Exactly what they intended; a place where all theatre goods can be displayed, purchased, rented and made.

September 21st at 10 o’clock the doors were open to the public. They didn’t have much advertising, just a sign on 109 Street saying ‘Halloween’ with a big arrow pointing towards the store. The first Halloween was a blur and a success. Theatre Garage started at 10575 115 Street (formerly Shirley Potter’s). It then moved in the winter of 2012 down the road to 10570 109 Street. Both buildings worked for the shop at the time as the business grew and changed, but just wasn’t quite home yet. In August of 2014 Theatre Garage moved to 3711 98 Street. This building was able to bring Christy’s and Tessa’s vision of the store into reality. The building had more space for rentals, makeup counters, wigs, hats and the thousands of accessory items. This location even had enough room to open a fabric and notion shop as well as a professional sewing space. With the new space, workshops were introduced in February 2014. Now a typical day at Theatre Garage was a busy makeup counter, laughter from the rental aisles, the sound of fabric bolts hitting the cutting table, voices of instructors teaching workshops and the purring of sewing machines.

In November of 2015 Tessa made the difficult decision to move on from Theatre Garage and return to work in theatre full time. Christy then took over Theatre Garage as the sole owner. It was a tough transition, but Christy felt Theatre Garage’s story wasn’t over yet. She has amazing staff at her side and is proud that Theatre Garage is known for their top quality products and professionalism. The staff believe in sharing knowledge from our theatre education and experience only carry items they use themselves.

Theatre Garage was born out of creativity and hard work and is excited to continue this tradition as a proud member of the thriving and exciting costume community in Edmonton.